Plastic waste is a severe problem around the world. As we strive to move to a Circular Economy innovative companies search to replace plastic with environmentally friendly packaging. Here’s an example…

One of the major offenders is the plastic six pack ring. We’ve all seen images of turtles or birds ensnared in them. But it’s not just the visible suffering of the animals which is of concern. The hidden danger is what happens to the plastic as it breaks down.  More than 8 million tonnes of plastic end up in the ocean every year. As it breaks down, research suggests that plastic enters the food chain via marine life  to eventually be consumed by humans. The need to eliminate plastic wherever possible is urgent.

Coming to the rescue is the Eco Six Pack Ring (E6PR).  E6PR is a small start-up company which has developed an innovative and environmentally friendly solution. The E6PR ring is a by-product of the beer making process. Made from waste wheat and barley as well as other compostable materials, it is 100% natural, biodegradable and compostable. Even if wildlife ingest the product, they are unharmed. 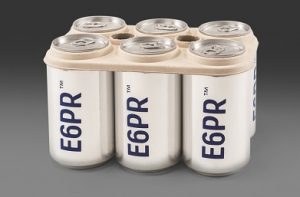 And just as important, the product is structurally sound. It can withstand the rigours of warehousing, transportation and retail environments but when discarded it quickly decomposes. Birds and marine life are safe from becoming trapped.

Saltwater Brewery, based in Florida, was E6PR’s first customer. As the name suggests, the brewery specialises in craft beers aimed at ocean lovers. This makes E6PR a perfect fit for the brand. The word has got out. More breweries are coming on board. There are over a dozen breweries now using E6PR including one of the big guys, Corona.

At GSM, we think this is a fantastic product. We look forward to picking up our six pack with its eco-friendly packaging in the very near future.

This article was originally published in GSM13. To read this and other great articles purchase this issue here.