Ground-breaking Euro-Australian Graphic Designer Gert Sellheim was inducted into the AGDA Hall of Fame in 2019. GSM thanks Graham Rendoth for sharing his previously published story on the life of Sellheim…

Gert Sellheim was born in 1901, in Estonia. At the age of 18, he enlisted and fought in the 1919 War of Independence against Soviet Russia. Following this, his family re-settled in Germany where he studied architecture. First in Berlin, followed by Munich, Gratz, Vienna and Paris. This exposed Sellheim to ‘classical’ architecture as well as avant-garde thinking in the form of the Bauhaus and Art Deco movements. Post-study, Sellheim worked for various architectural practises until the economic and political instability within Germany prompted him to emigrate to Australia, in 1926.

Like many new immigrants of non-Anglo origins, authorities did not consider Sellheim’s English good enough for professional work. Thus, the architect was indentured as a wheat farm labourer 150km east of Perth. Despite these hardships, Sellheim fell in love with his new homeland.

Two years later, his qualifications were recognised and he joined a local architectural practise. In 1930, he moved to Melbourne where he opened a multidisciplinary commercial art studio with designers Percy Trompf and James Northfield,

One early client was the Australian National Travel Association (forerunner to Tourism Australia). ANTA’ s ‘raison d’etre’ was to attract international visitors to this ‘new nation of the future’. They engaged Sellheim to design posters for travel offices throughout the world. In 1938, ANTA also commissioned Sellheim to decorate the Victorian Government Tourist Bureau in Collins Street, Melbourne. He created a large photo-montage mural plus display graphics which won the 1939 Sulman Prize. As is evident in many of his works, Sellheim drew inspiration from Aboriginal imagery. Whilst today we would consider this to be cultural appropriation, Sellheim did have genuine intent to celebrate Aboriginal culture and its connections to the land.

Sadly, in 1943, Sellheim’s own ethnicity caused issues. He, along with thousands of other Australian immigrants, was officially classified as an enemy alien. As a result, the government interned him for the duration of the Second World War.

Once released, Sellheim returned to Melbourne. Unfortunately, demand for poster design had decreased and so he turned his attention to book design and other creative projects. In 1947, he moved to Sydney and established Gert Sellheim Design. It was here that he began to output a significant body of book work for publisher and friend, Oswald Ziegler.

Gert Sellheim died in 1970, aged 69, in his Sydney home —still with a few Ziegler books on the go. His wife Sally, son Nikolaus and daughter Karin survive him.

The Legacy of Sellheim

Sellheim’s graphics continue to reflect the way Australians visually express their continent and people. In 2001, the Powerhouse Museum (now MAAS) included his work in the exhibition ‘Celebrating Australia: Identity by Design’. The exhibition then continued on to  travel to Washington DC and then onto New York. This exposure perhaps explains the price tag achieved for his 1936 poster ‘Australia—Surf Club’. It sold in New York in 2011 for USD24,000. A record price for an Australian poster. Galleries, universities and public libraries across Australia hold Sellheim’s work. And of course, his famous Flying Kangaroo lives on in skies above the land down under. 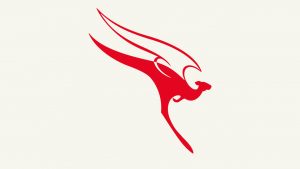 One of Sellheim’s first projects upon arriving in Sydney was to design a new logotype for Qantas Empire Airways. He specifically developed the new logo to promote ‘the kangaroo route’ (Australia to the UK). The Flying Kangaroo first appeared on the airline’s aircraft in late 1947. Today, many iterations later, it is easily one of the most recognisable logos in Australasia. Sellheim continued to work with Qantas through to the 1960s, producing a wide range of collateral. Nik Sellheim recalls that Qantas flew his  father to all their international ports. The trip lasted about four months, with a stopover in Germany to visit family. He returned with a large body of work—photographs, paraphernalia and sketches—and then began months of illustration and design using the material. 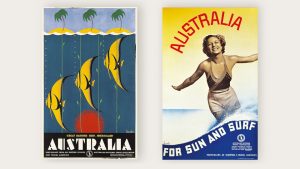 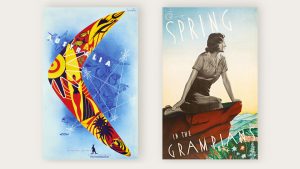 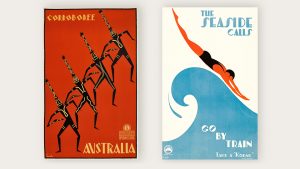 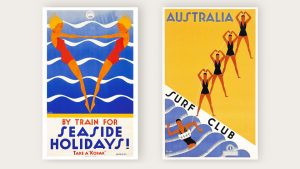 The Golden Age of Australian Posters

We often consider the 1930s—1940s to be The Golden Age of Australian posters. As a form of advertising media, posters became increasingly popular around the world during this time. These examples, produced for the Australian National Travel Association (ANTA) and Victorian Railway Australia (VR), date from the 1930s and showcase a strong Art Deco influence. Critics favourably compared these works with contemporary European and US designs as examples of cutting edge graphic art.

Many of Sellheim’s posters promote tourism. They demonstrate the growing awareness of Australiana through icons such as the Southern Cross, beach culture, palm trees, fish and, of course, the boomerang. These examples, dating from the 1930s to the late 1950s, use photo montage, combined with a mix of drawing, hand-lettering and commercial type. 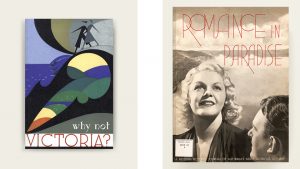 In 1936, Sellheim began a life-long collaboration and friendship with book publisher Oswald Ziegler. Ziegler had developed a niche in commemorative, regional and industrial publications.

One of Sellheim’s first books ‘Why not Victoria?’ (p.1936), features an evocative 10-colour Art Deco cover.

Sellheim continued to create many souvenir books and magazines such as the 400 page ‘150 Years—Australia’ (p.1938), and the elegant ‘Romance in Paradise’ (p.1938). During his career, Sellheim designed more than 50 small to large books. He collaborated with some of the best photographers of the day including Max Dupain, Wolfgang Sievers, David Moore and Frank Hurley. 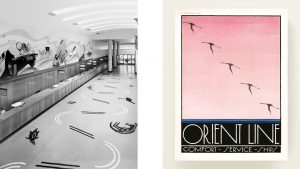 In 1938, Sellheim designed this photo-montage mural to decorate the Victorian Government Tourist Bureau in Collins Street, Melbourne. Clearly evident is the influence of Aboriginal art. It went on to win the 1939 Sulman Prize.

Sellheim’s poster design aesthetic translated well to print advertising. An example of this is the poster for the ‘Orient Line’ appearing in ‘The Home’ magazine, July 1932. 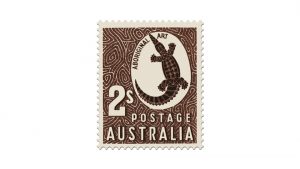 Amongst Sellheim’s smallest work was the above two shilling stamp. Designed in 1948, featuring a crocodile graphic and very much in the Aboriginal style.

GSM would like to extend our thanks to the Estate of Gert Sellheim and to the Australian Graphic Design Association (AGDA) for their assistance with collating material. To the best available knowledge, all projects shown were designed and illustrated by Gert Sellheim. The shared creative input of others, including designers, illustrators, photographers, writers and clients is acknowledged.

This article has been edited from a previously published story by Graham Rendoth. The content of which was originally extracted from interviews, articles, government records, family and other sources. Images have been sourced from Josef Lebovic Gallery, institutions (government, libraries, universities) and personal collections.

We originally published this article in GSM16. To read this and other great articles purchase this issue here.