Some print jobs are far from straight forward. This children’s pop-up book, ‘Let’s Take A Walk’, was one of those jobs. The extra effort won them Supreme Runner-Up in the 2017 Pride in Print Awards. The judging panel described it as ‘…an excellent job with lots of tricky finishing requiring an eye for detail…’. GSM takes a look…

This particular print job initially began life as a menu revamp conceived by Sam Crofskey, owner of Christchurch café C1 Espresso. The concept of the menu was to use illustrations by Hannah Beehre, of local buildings pre- and post- the 2011 earthquakes. 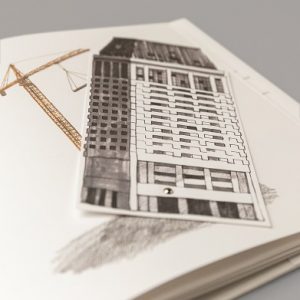 However, the illustrations were “so real and so sad”, that Sam requested they be softened with the addition of colourful diggers. The result was too good to use in a menu alone, and so the idea of creating a children’s book was born.

What followed was four years of work from concept to finished product. The book soon evolved into a story-based way of opening dialogue with young children. To help them understand what they were seeing and experiencing in Christchurch.

In the five year period following the 2011 earthquakes, it was necessary to demolish ninety percent of commercial buildings in the CBD. For many children (and adults alike) this was a period of unparalleled, forced change in their local environment.

Certainly, it was no small task to make this a positive story. However Sam, being Sam, found a way. A strong believer in using people’s skills to their advantage, Sam encouraged one of his cafe staff, Nicole Phillipson, to try her hand at writing a story to fit the illustrations.

With illustrations, story and even the book size already determined, Sam requested local designers Alec Bathgate and Tahlia Briggs, of Bathgate Design, to pull it all together. To ensure the design didn’t compete with the content, they kept the typographic style simple and understated but still legible for children. The occasional enlarged emphasized point adds colour to the text.

This was a technically demanding book to produce. A good portion of Alec and Tahlia’s role was to make things happen. They talked to lots of people, all experts in their field, and revised the mock-up as they went. It was a process of taking one step at a time, finding a solution and forging ahead.

The printing was undertaken by Christchurch printery Caxton Press, with dielines made by Custom Cutting Forms and embellishments produced by GoldCraft. 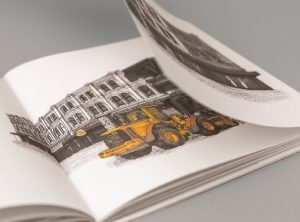 Pop-up books are always labour intensive to produce. ‘Let’s Take A Walk’ was no exception to this with all folding, collating and gluing done by hand.

Local bookbinding firm McHargs came on board to lend their expertise in this area. Owner Johnny McHarg and his team produced numerous mock-ups to test ideas before production of the book began. For ease of reading in a parent-child environment, the book had to open and lie flat. To achieve this, each page was creased 10mm from the spine and then sewn together using an old Singer sewing machine.

To give the team the freedom to create, they decided to self-publish the book. This meant they were not hindered by the commercial boundaries that would normally be imposed by a publisher. An example of this was the choice of white for the dust jacket. This is normally a big ’no-no’ if selling in a retail environment. However, the team felt that the use of white represented the fragility of life and the emotions people experienced post-earthquake.

An Eye for Detail

One of the wonderful aspects of a good pop-up book is to leave the reader wondering “how?”. The many fold-out pages, moving or stuck on elements, plus images running across gutters required incredible attention to detail. This and problem solving throughout the design, print and production process was key to the success of the final product.

In this example, the wrecking ball on the crane is attached from page to page by string. This presents a number of problems, such as —how do you hide the tied knots and glue?

Due to the amount of paper engineering required for the book, the stock was a key consideration. They chose BJ Ball Advance Laser as it offered good durability and was malleable enough to fold cleanly.

‘Let’s Take A Walk’ is a success because it represents the talents, commitment and emotions felt by a team of industry experts. A work of collaboration producing something very special.