Kiel Johnson is an internationally renowned paper engineer & cardboard sculptor based in Los Angeles. His work has been used by some of the biggest brands in the world—Disney, Adobe, Toshiba…

GSM managed to track him down for a flat white and a chinwag between his commitments for TEDxChristchurch and his BJ Ball-sponsored community-collaborative workshop at The Christchurch Art Gallery Te Puna o Waiwhetu.

GSM: Your life is a very creative one! Has it always been this way?

KJ: I come from a creative family where my mother was constantly crafting and my Dad worked in newspaper. That’s the old school newspaper of cutting and pasting. They were
very much my inspiration and, like them, I’ve always had this dream of pursuing some type of flow of imagination from my hands. I’m just fascinated with imagining something, drawing that thing and being able to build it.

GSM: So, how did you get into making cardboard sculptures?

KJ: In art school I enjoyed making sculptures. However, I always felt there was a disconnect between my drawings and the sculptures I was creating out of metal and steel. I felt like I was working in a trade school rather than a fine arts college.  It wasn’t until I was out of school, looking to sculpt, that I started to play around with cardboard. Basically, I was too broke to afford other supplies. and there’s always plenty of cardboard lying around. As I worked, I realised how fast and how big I was able to build. There was a synchronicity between my pencil and knife. It just made sense. I realised there was so much potential.

GSM: You do a mix of art installations and commercial work, which do you prefer?

KJ: My dream has always been to pursue the Arts. But, soon after I started building out of cardboard, I got requests for commercial work. Companies like Fast Company, Adobe, Toshiba, and DisneyAX. Cardboard is quick and I also draw fast. It’s a perfect combination for the commercial world where time is of the essence. This, coupled with the fact I can build pretty much
exactly what I draw gives me the opportunity to say ‘Yes’ to a variety of projects. To be honest, if I do accept a job it is because I am drawn to the project from an artistic point of view. Because of this, they don’t really feel like commercial jobs to me. 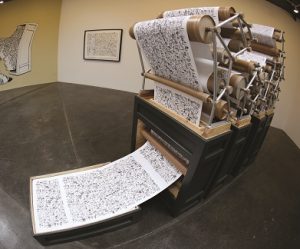 Drawing is a Visual Language

GSM: You draw a lot. Which do you prefer—drawing or making sculptures?

KJ: Drawing is key to everything. It’s speaking ‘Visual’, like someone speaking Russian as a second language. I think I almost speak better Visual than I do English. My drawings are diagrammatic and very visual, so it’s easy for the client to get into my head and see what I see. I also have great confidence in my ability to build what I draw. Working in cardboard is like 3D drawing for me. There is no need for exact measurements. I look, I create, it’s all very freestyle and organic.

GSM: Over recent times you have got into videography. Can you tell us how that has evolved and how it has helped you with your work?

KJ: That all happened quite accidentally. A friend asked me if I could make a cardboard camera for her shop window. I wasn’t that keen, but since her boyfriend is a videographer, I said I’d do a trade.  ‘Camera’ for video time. I’d been thinking how it’s all very well seeing a finished sculpture in a gallery but for me, the fun is in the making. I wanted to get that across to my audience. ‘Twin Lens Reflex’ was our first clip. For some crazy reason it became a staff pick on Vimeo and went viral. The video inspired people to connect with me and the invitations came flowing in. This was when my commercial work really took off, but also the collaborative work.

GSM: You are very active on social media, how does that help your work?

KJ: Instagram is one of the greatest things for artists. Back in the day it was such a hard thing to get your vision out into the world. Luck played such a huge part in getting space in a gallery. People visiting that gallery. Having a positive review published etc. Nowadays, people that care about what I’m doing are looking at it everyday. With Instagram I get to bring them along
on my journey, show them the ins and outs of my creations. My work is alive and real, rather than static in a gallery.

GSM: What are some of the challenges in your collaborative work?

KJ: Content and scale are probably the biggest challenges but again my drawing helps with this. I tend to draw what I envision so everyone is on the same page. For the covered wagon we created at Weber State University, I drew things that I would put into it. Things like dynamite, sacks of flour, lanterns etc. I then drew the steel framework and the students learnt how to weld by following my drawings. I also worked out the size of the wheels for the laser cutter. This way we built everything to a similar scale. After that, I let go and opened it up to the students. There are a million of things in there that I didn’t put in. Things like a tin foil mirror, cooking utensils, even a rattlesnake. I did the same for the airplane cockpit as part of the ‘Pulped Fictions’ exhibit at Torrance Art Museum, California. I just told the students you need dials, switches, gauges, anything you have in a cockpit. Everyone made different things and then I did the composition. 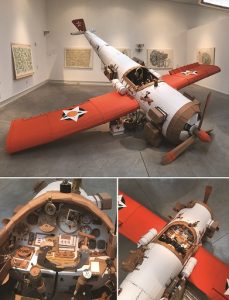 GSM: Tell us about your collaborative work?

KJ: Well, that is why I’m here in Christchurch. Back in 2012, I took part in a side conference ‘TED Active’, to TED ‘The City 2.0’ conference in Vancouver, Canada. TED had seen my giant cityscape and wanted it for their conference. I suggested we take it one step further and bring an incomplete version of the city so the participants could create their own version. The model became the focal point of the conference for the speakers and participants. The energy was amazing. This is where Kyla Coburn, from the Mi

nistry of Awesome, introduced herself. She suggested I come to post-earthquake Christchurch. The city needed a positive project for its people to discuss the rebuild of their city. It was a cathartic experience for many of the participants. And now, here I am back in Christchurch, doing a similar thing.

GSM: So, what exactly are you doing at The Christchurch Art Gallery?

KJ: This time around, we are involving the general public to create a fantasy landscape. BJ Ball Papers have donated all this wonderful paper for kids and adults to make into their own creations.
I’ve created a few basic elements such as a huge hot air balloon basket which will hang from the ceiling. It comes with navigation equipment, periscope, sandbags, and ropes, ready to explore the South Island. The community is building the rest— a surreal landscape of mountains, farmland and urban living—it’s all a little bit crazy, but fun!

GSM: How has the response been?

KJ: Absolutely amazing! Kids love what I do, I really inspire young people and at the same time I get such a kick out of turning them into ‘makers

This article was originally published in GSM13. To read this and other great articles purchase this issue here.