MATE ACT NOW is a co-ordinated response of over 150 designers from some of the world’s top creative studios. It’s initial aim was to drive climate change in response to the 2019/20 Australian bushfires. However,  the global outbreak of Covid-19 recontextualised it to something bigger!

GSM talks with Chris Flack, from Strategy Design, Christchurch, about the reasons why he initiated “Mate ACT NOW”, how it all came together and what the response has been…

Chris, you’re obviously passionate about saving the environment but why did you decide a poster campaign could help? 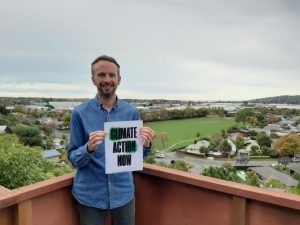 We had just had a few hot days in Christchurch but weirdly you couldn’t see the sun because of this layer of cloud. At first, I thought it was a funny coloured sea fog but quickly realised it was smoke that had drifted over from Australia. I tried to explain what was happening to my 2 year old son which led me to creating a simple poster with the words ‘CLIMATE ACTION NOW”. With the help of my son’s scribbles it turned into “MATE ACT NOW”.

I’ve always believed in the power of the visual to communicate a message and used posters in a previous campaign. It was after seeing a poster on Instagram that prompted me to create the “Mate Act Now” campaign.

How did Christopher Doyle and Paul Garbett inspire you to create “MATE ACT NOW”? 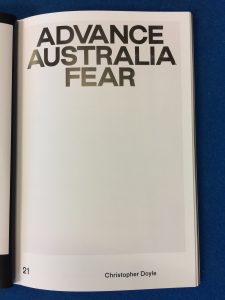 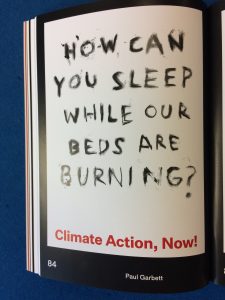 While mindlessly scrolling through Instagram I saw a poster by Australian designer Christopher Doyle. It had the words “Advance Australia Fear” written above a picture of their prime minister, Scott Morrison. The image hit me and got me thinking about the power of posters when they are designed well. I also noticed that this particular poster was being given away for free!. Making it freely available meant more people could use it. Hence the share-ability was stronger and more powerful.

I then noticed Paul Garbett’s comment, promising he would also create a poster using the quote “How do you sleep while your beds are burning”.

How did your idea evolve into reality as far as getting designers and sponsors on board?

It was just a matter of asking. I went through my black book and Instagram, picked designers I admire, designers that are young and up and coming, as well as those who are older and wiser. I also invited design schools to involve their students, asked designers to recommend other designers and “nudged” as many people as I could to be part of it.

Luckily, (if the design gods ever forgive me) I could lean on my passion project, Comic Sans for Cancer. This project used the 20th anniversary of Comic Sans to raise money for Cancer Research UK – it went viral. 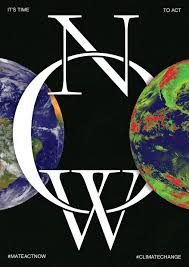 Purposely, I tried to stay clear of inviting the same designers and mentioning the Comic Sans project as I wanted “MATE ACT NOW” to stand on its own. This definitely proved to be the case when I approached Lorenzo Fanton, from Pentagram. The key to getting people on board is to just ask – it’s that simple.

How has your project evolved from your initial concept to the finished campaign?

It has definitely grown! Initially, our aim was to raise funds for the Australian Bushfire Relief Fund. This then grew to creating an initiative to encourage people to act on climate change but Covid-19 changed everything.

In fact, I almost threw the project in as the importance of climate change and this initiative no longer felt as important to me.

However, I soon realised that people needed a distraction from Covid-19 and all the uncertainty out there. They wanted a reason to come together as a creative community, to be a part of something where they could make a difference. A project they could be in control of.

Inspite of its negative impact on our lives, Covid-19 could actually become an opportunity to open up a global conversations on how to take better care of our planet for the long run.

Do you have a favourite poster? Which one and why?

I have a couple of favourites, the first being “Make Earth Greta Again” by Graham Barton (Folk Design). It is a simple powerful message and perfectly executed. For me it sums up what can be so powerful about graphic design and the medium of posters.

The second is “Melting Earth Ice Cream” by Tsieske Clark. I love the naivety of this illustration and how you have to take a double look. A melted ice cream is so innocent and reminds me of my childhood and then BOOM it hits you – this is what we are doing to the earth, letting it melt. 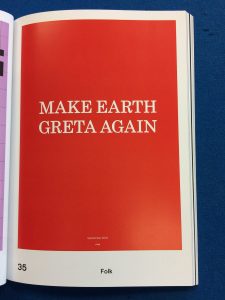 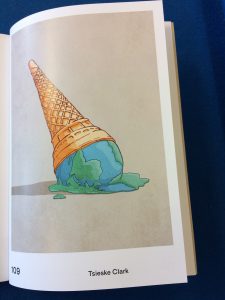 You’ve run a similar campaign in the past – Comic Sans for Cancer – How do the two compare?

They are pretty similar in that they both use graphic design and posters as a medium to create awareness. Ultimately, both are intended to create change and action.

“Comic Sans for Cancer” was less digitally focused. It had a physical exhibition in London, a limited edition newspaper catalogue and a book of the posters. It was about celebrating a moment in time (the 20th anniversary of Comic Sans) and raising awareness of Cancer Research.

“Mate Act Now” has posters at its heart but is primarily digitally focused. I wanted the “power of the digital generation” to share the posters digitally. This time around I didn’t want to print things just because we can. Hence, the limited edition book is the only part of the campaign that is printed.

MATE ACT NOW was launched on Earth Day, 22 April, what has the response been like?

Phenomenal! Starting on Earth Day 2020, we used the social feeds of our design and creative community to amplify the message of the current climate crisis. So far we have had an online reach of 7 million and sold 240 of the 250 limited edition books.

You call this campaign a “protest for the digital generation”. However, along with the digital campaign, you are also selling printed books. Why is print so important to you?

Yeah, it’s ironic isn’t it?! I was quite torn at the start as this is all about the environment. I didn’t want piles of posters sitting around if they didn’t sell. That’s why I decided to make all the posters available to download for free.

Digital is a great way to distribute but it has no permanence. That’s where print comes in.

A well designed and thought-out book can present information a lot better than a website. There is also value in a book as it helps capture a moment in time.

I also felt a book was the best way to showcase the collection of posters as well as provide a narrative on the wider context. The book’s Foreword includes a piece written by Jack Mussett on the power of posters throughout history, as well as a comment from Adrien Taylor and a call to act from Kevin Finn. 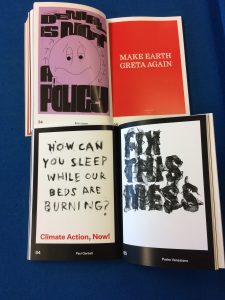 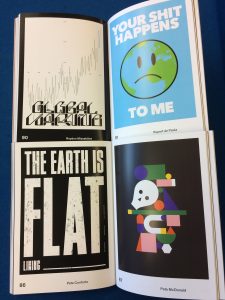 You were quite specific in your choice of paper for the book – Evergreen Environment Desert Storm, Eco100 and Maine Recycled Silk. Why these particular paper grades? Why is it important to you to choose the paper you print on rather than leave it to the printer?

Paper is really important in print. Seems obvious but a lot of the time this is left as a last minute decision. For me, it is one of my first decisions as the stock needs to balance and work with the design. Originally, I was keen on a black stock. However, after talking with Liam Ooi (who designed the book) we decided on Evergreen Desert Storm for it’s tactile nature and environmental qualities. We both loved the little ‘flecks’ and the grain in the stock. I love the way the white ink looks slightly metallic when printed on the cover – I couldn’t be happier.

For the text my original spec was ECO100 for both the intro section and the posters. ECO100 is a 100% recycled stock that I have used often, it always looks great. However, Liam suggested Maine Recycled Silk, a coated paper, so the printer could easily reproduce the posters. Spectrum Print ran some test sheets on their Indigo to ensure it ran smoothly. It looked amazing!  We were sold with the mix of the tactile feel of the uncoated and the smoothness of the Silk to make the posters pop. It’s so different to see the posters printed rather than viewing them on back lit screens.

This article will be published in GSM16. To read this and other great articles purchase this issue here.